Former Auckland player Ryan Martinoli has experienced first hand what hard work and determination can achieve, now playing in an Elite Junior A team in Switzerland. Ryan provided a snippet of his experience to date, in the story below. 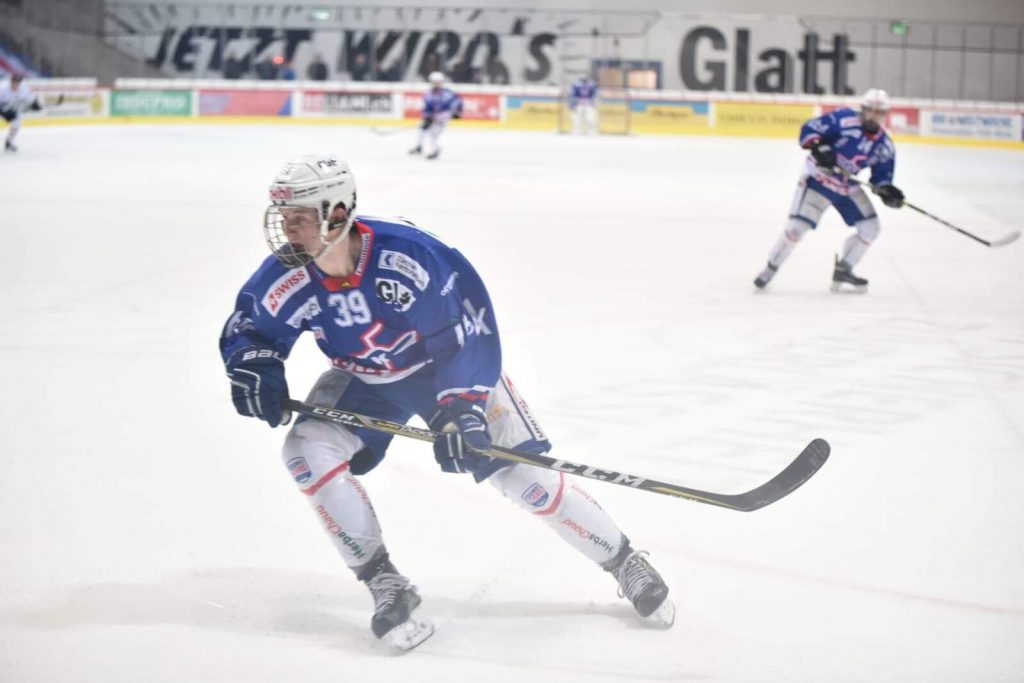 My name is Ryan Martinoli im 18 years of age. I am a Kiwi kid from Auckland, some of you might remember me from the Paradice Ice rinks in Botany and Avondale. I am currently playing in Europe, Switzerland, at an Elite level of Hockey, for the EHC Kloten Flyers, Elite A Junior Team (U20). The junior team from the pro Team in Kloten.

After one season in the PSHF League in Canada, playing for the Ontario Hockey Academy (OHA), I was offered a great chance here in Switzerland. The Elite A Junior league is one of Europe’s best junior league and is a good pathway to a pro contract.

You might know some of the Swiss NHL players, like Nashville Captain Roman Josi, NHL first over all pick Nico Hirschier, Nino Niderreiter, Fiala etc.. They all played for one of the Elite A clubs in Switzerland, before going overseas or becoming pro.

This is a quick review of my season here in Switzerland giving you an insight to how it is to be playing and competing at an elite level of hockey overseas.

At the start of the 2018/2019 season, we are in the northern Hemisphere, so everything is upside down, winter, summer etc. to New Zealand, we started with pre-season Summer practice in May.

In Summer practice we had training every day for 2-3 hours. In the gym, doing weights, on the running track training our endurance and foot speed. I definitely didn’t enjoy the endurance and foot speed training, but as we all know not everything we practice is fun and enjoyable. A very, very important part to becoming a pro hockey player is to be as complete as an individual player as possible.

So, after biting through 2 months of hard work it was finally time for the pre-season games against 8 teams from Switzerland.

One of our opponents was SC BERN. In Bern we got to play in one of the biggest Arenas, outside the NHL,  the Postfinance Arena, capcity 17,031 . Of course it was empty, but very impressive, never the less. And motivating. How must it feel, playing in front of a packed arena?

I must say, pre-season games are very special. You get switched through all the lines, playing a different  role in every line and in each game. Winning 6 out of the 8 games and tallying a total of 11 points, I was very happy with my performance.

As the season started, I found myself in the farm team at EHC Bülach (Elite B league). Not sure why or how, I was definitely disappointed. But instead of keeping my head down, I decided to make the most out of the situation I was in. I focused on working even harder on all the things that the coach wanted me to improve. The two things he wanted to see, were my skating speed and that I take more responsibility on the Ice.

So that was exactly what I focused my work on for the next weeks. Game 1 with the Farm Team.

By the time game one came around, I had not had one training with the team, as I finished the whole pre-season with Kloten. It was a bit weird at the beginning. I had never talked, met, let alone played with any of these guys.  So, yes, you could say I was nervous at the start. I definitely had to show to the Kloten Coach, that I was working on what he wanted me to improve and that I will show it in the games, right away. So he would take me up into the A Team again.

We won the first game 5-3 against HC Thurgau Tigers. Unfortunately I only managed one point. But things were looking good for the next couple of games ahead.

Playing in the first line and all special units, I was definitely getting a lot of ice time, approximately 30-35 mins in the first game. The ice time did not change for the whole time I was playing in Buelach.

In the mean time Kloten had a great start to the season as they had 8 victories in a row.

But all good things don’t last for ever and things did change. They then went on a 11 game losing streak.

That’s when I got the call up.

I was super excited to have finally gotten the chance to be able to make my mark in the first team.  And that’s was exactly what I did. From then on, till the play off’s,  I had a total of 34 games for Kloten. Getting a total of 17 points of which, again, only 13 were given to my name.

I played in the 3rd line with players like Elia Schmid (current Swiss U18 National Team) and Lenart Markun (Slovenian U18 and U20 National Team player) We had a great understanding and went on to produce a total of 54 points together.

After a few up’s and down’s, we finished the regular season on the 7th spot out of 12 teams. We clinched the playoffs by a thread.

In Switzerland, the top 8 teams make the playoffs and the last 4 go to play in the playoffs.

1st vs. 8th, 2nd vs. 7th and so on. Which meant we would play SC Bern in the 1/4 finals. An interesting, difficult, but not impossible task lay ahead of us.

Some times during the season there are breaks, which means a weekends with no games in the league. Those weekends are mostly spend training or competing at tournaments. During one of those breaks, we got an invitation by Jung Adler Mannheim (the best Junior Academy Team in Germany), to go and compete in the international Tournament they were hosting.

With teams such as Sparta Prague and Shattuck St. Mary (the same high school Crosby, Toews and many other big NHL players played for) were attending.

As we arrived in Mannheim, in the morning, we headed straight to the ice rink, the SAP Arena (15,000). Game 1 was against the home side Mannheim. Mannheim is a very respected team in German Ice Hockey, as well on the international stage. Despite us being the underdogs we beat them 5:3.

On the next day we played The American representatives Shattuck.

We believed that we stood a good chance of beating them as our morals were high from last nights victory. And as predicted we bet Shattuck 4:2. 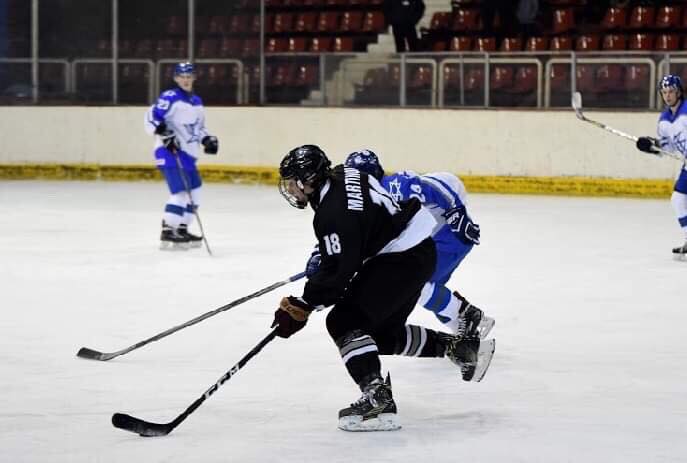 We were on first place and “only” had  Sparta to beat. Sparta Prague juniors, the junior team from the famous Sparta Team from the Czech Capital.  Out of the 4 teams Prague was predicted the weakest team but was definitely a team to look out for as they did beat home team Mannheim on day 2.

So it was a clash for first and second place.

We did pull through the better team, winning with a solid 8:3 score line. That meant, we won the tournament and that had us all super stoked. The trip home was fun.

After the tournament we had a 4 day break, before going into the playoffs.

Bern was a great team and very difficult to play against as they were the most efficient team in the whole league, after the pre-season.

We got a taste of that straight away. In the first game we got thrashed 5:1.  Despite having more than 3 times the amount of shots on goal then Bern.

During this weeks practice, leading into the 2nd game, we did a lot of video reviews and analysis.

Practices were short and not very hard but super detailed and very precise to game like situations.

In the second game, at home, we did an amazing job but unfortunately lost 4:3 in the 2nd OT.

Gutted but yet heading into game 3 with a good feeling, we took the bull by the horns and bet Bern 3:2 on their home ice. So now it was a 2-1 series and we felt we were back in the Series.

The next game would be a make it or break it type of situation and you definitely could feel it, as the 4th game went on. Emotions were extremely high on both teams even the Coaches got a bit out of hand at one stage, having a real go at each other.

We gave our best, but unfortunately didn’t make the cut, losing 3:4 in OT, again, we got knocked out.

With that ending our season short, was a massive let down and hard to swallow. Hard to believe, but we could not be too hard on ourselves. Being the youngest team in the league and taking the second best team to game 4, we do believe we left it all out there. What was reassuring to know was that any of the 3 games that went to OT could have gone in our favour, but it just wasn’t meant to be, which still sucks but unfortunately is reality.

After the playoffs we had to play 3 more ranking games, which really did not matter much. The Coach already started bringing new, young players up, to give them some exposure to the Elite level.

After the last season game we still had 3 weeks of practice where we already started getting ready for the new season on and off the ice.

By the way, Buelach made it into the Elite B Finals, where they unfortunately lost.

In this Season I played a total of 65 games, including pre-Season and tournaments. I had training or games 6 out of 7 days, sometimes 2 trainings a day. On top of that I use the gym 3 to 4 times a week, to work on my core strength etc.

I need to mention, that during all of this season, I had to work part time. In the mornings, to support myself, financially. At this stage a lot of things, like travelling with the Team, some equipment and foods and drinks, during practice and games are free for the Team but the Club does not pay the Elite players.

A very big thank you to my very understanding employer and my Grandma, who looks after me so lovingly.

For next year I am supposedly planned to play a bigger role in the team. Maybe even getting my debut in the Men’s Pro team at EHC Bülach in the Mysports league (EHC Bülach seniors is the farm team from EHC Klotens NLB men’s pro team) so that is very exciting and I am really looking forward to the upcoming season. But before any of that happens I’ll have to work myself through each and everyday off summer practice and what ever else comes my way, on my path to becoming a pro Ice Hockey player. I am still chasing my dream, more than ever.

After all, I can say, I had my set backs, struggles and hard times in this crazy year. I also learnt a lot. Going from a player being sent down to the farm team, then becoming a first team player, then playing the playoffs in the 3rd line and even playing on the pp and pk.

The most important thing that I learnt this year is to always give it your best no matter what!  Never Ever give up – as you never know what can happen next.

I would also like to say a massive Thank You to my family in New Zealand, the Coaches in Auckland  and everyone in New Zealand Ice Hockey. Without your support over the past years I would not be able to chase my dream.

To all the young Kiwi kids playing hockey back home,

Work hard, keep your head up and chase your dreams.

Stick at it and give it your best shot.

In the end of the day you never know whats gonna happen in the future.

All the best to you all,