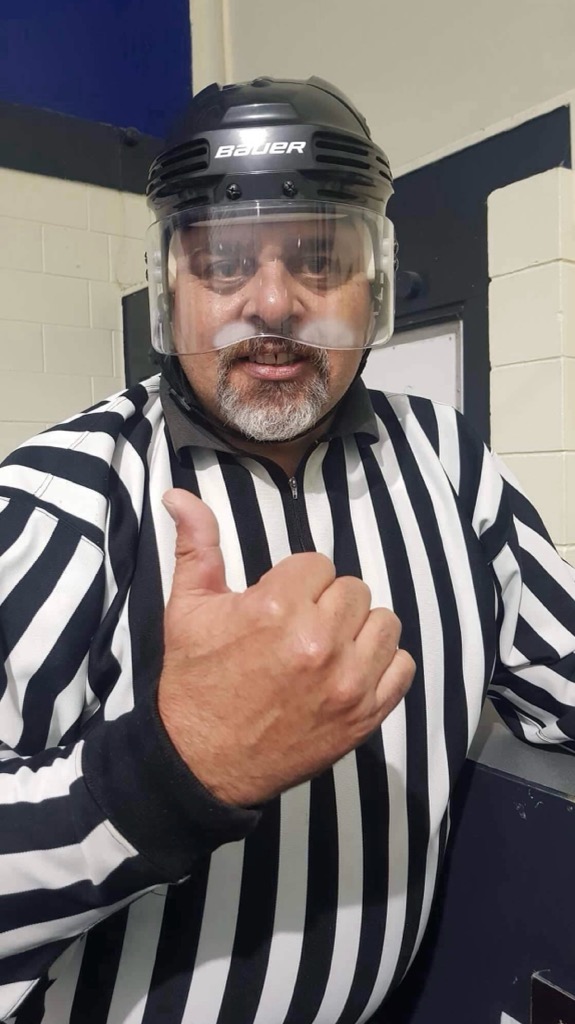 Alan Tamepo, Ngāti Porou, longtime Auckland Ice Hockey Association referee and longer-time ice hockey player and fanatic, passed away last Friday 29 January. Al is survived by his loving family, Anita, Adele, Brooke, and Charmaine.
Alan – “Big Al” – began and ended his active player career with the Manuwai ice hockey club. During his time with Manuwai, Al established himself as a gritty player and a great teammate. He wasn’t shy about letting the referees know what he thought about their calls, either.
So, it was with some surprise that Braden O’Loughlin, then AIHA Referee-in-Chief, received Al’s request, asking to learn how to become a referee. Braden thought Al had lost a bet with one of his Manuwai teammates, but Al was serious. And the Association needed referees. Before Al’s first game in stripes, Karl Peni teased him about becoming a referee. Al told him he better quiet down or he’d spend the game in the penalty box. As it turned out, Al didn’t assess Karl any penalties. Instead, they spent most of the game laughing as Al complained about having to pick up the pucks off the ice for the faceoffs.
And that was one of the great things about Al as a teammate and a referee. He loved to talk and he loved to share. Players remember him as one of the best on-ice officials to banter with. Al had a natural feel for the game and was all business when it came to officiating. But he did it with a generosity of spirit that won the respect and affection of all who had the privilege of taking the ice with him.
As a referee, Al was dependable and always wanted to learn more. He seldom turned down assignments, he always showed up, and he worked many, many games. He officiated AIHA youth and adult-league games, and he was awarded AIHA Referee-of-the-Year award more than once (an award for the official who had given the most during the season). Al worked NZIHF youth representative league games, attended NZIHF national officiating camps, and worked as a linesman in the NZIHL. Lastly, he mentored newer, younger officials, giving advice and helping to build the future of officiating in Auckland. He gave back heaps to the game he loved, and he was loved by all who knew him.

Referee and ice hockey friends of Al are invited to drop by Bricklane Restaurant & Bar, New Lynn, on Wednesday 3 February, 6-7pm, to share a glass and remember him