🏒 Prizes & A VERY Special Guest from USA Hockey at Learn to Play Next Week! 🏒

Make sure you come along to our final Learn to Play sessions for 2019, next week, as we have spot prizes to hand out, a very special guest attending from USA Hockey and lots more planned!

Everyone is welcome, whether you attend Learn to Play normally or not – come along and check out the action for yourself and be in to win USA Hockey merchandise and more!

Wednesday: Avondale 5:45pm – 6:45pm – Spot prizes, get your photo with Santa on ice and a special visitor, Ken Martel of USA Hockey.

We’re privileged to have Ken Martel of USA Hockey visiting and he will be at Wednesday night Learn to Play to help develop hockey in Auckland and hand out USA Hockey merchandise and more prizes!

Bring your friends, family and neighbours and make sure you come along to the final Learn to Play sessions for 2019! 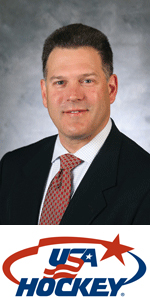 With over 25 years of experience in player development and a long history as a coach with USA Hockey, Ken Martel was named technical director of USA Hockey’s American Development Model in May 2009. He is charged with helping provide a framework for associations nationwide to follow for optimal athlete development.

A four-year (1985-89) letter-winner as a defenseman at Lake Superior State University, Martel helped the Lakers to the school’s first-ever NCAA national title in 1988.